Fred Schafer was a young Navy sailor in 1962 when his commanders summoned the ship’s crew one day for a briefing while in port in Hawaii.
“They told us that we had been selected for a top-secret group,” recalled Schafer, 80, from Lebanon. “We couldn’t tell our people, we couldn’t tell our families, we couldn’t tell our friends. That was what we faced.”
Being told that the FBI was looking into the security clearance for the mission gave him more confidence, Schafer said.
“I felt really good that the FBI was doing those checks.”
Schafer grew up in Salem, graduating from North Salem High School in 1960. He joined the Navy a month later.
He was on the USS Chipola, “a floating service station: we refuel ships that were at sea”, which, before the Hawaii stopover, had passed through the Panama Canal and participated in the recovery operations of the Gemini spacecraft .
This was going to be different.
“As we left Hawaii, the television was showing the first atomic explosion on Christmas Island,” Schafer said, referring to British nuclear bomb tests that had taken place several years earlier. 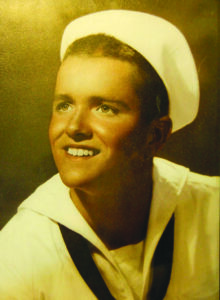 They were headed to Johnston Atoll, where the US Air Force was about to launch a series of eight PGM-17 Thor missiles as part of “Operation Fishbowl,” a part of “Operation Fishbowl” nuclear weapons tests. Dominic” in the Pacific. The series of launches included an atmospheric nuclear explosion.
One of them produced a brilliant artificial aurora that could be seen over Hawaii, nearly 900 miles away, and knocked out electrical power and communication systems on the Hawaiian Islands. The blast pumped enough radiation into Earth’s atmosphere to destroy or damage seven orbiting satellites.
Schafer and his teammates had ringside seats for that.
“We saw it move through space as it exploded,” he said. “At that time we were told that some of the lightning was harmful, some was not.”
The boaters watching were wearing T-shirts and overalls, he said.
“They gave us dark glasses and told us to go up to the desk if we wanted to look,” Schafer said. “They told us they would tell you when to put your glasses on. The glasses were so dark that you couldn’t see your hand in front of your face.”
Until the explosion came, he added.
“When the explosion went off, you could see the bones in your hand and a chest X-ray of the guy in front of you.”
However, they were not too worried.
“For 18-year-olds, most of us on the ship, the silver bullet that would affect us had not yet been done.”
When Schafer was released and returned to Oregon in 1963, “I didn’t keep quiet,” he said. “I started talking about it with my parents and they said, ‘It’s just another great story you’re telling.'”
They figured he’d gotten into trouble when the FBI showed up to do his clearance check, he said.
Schafer began work on the new Safeway store in Sweet Home in 1964, eventually settling in Lebanon.
He married his wife Barbara and they had two children. Schafer worked as a distributor for Fisher foods, including introducing South Portland’s Mug Root Beer. Later, he worked for Frantz bakery products, distributing in Lebanon and Sweet Home.
One day in the early 1980s, he passed by the American Legion post in Lebanon, where he met a member of the National Association of Atomic Veterans, an organization that had been founded in 1979 by Orville and Wanda Kelly of Burlington, Iowa. Orville Kelly, a radiation cancer victim, and his wife established the group to advocate for veterans suffering health problems related to radiation exposure during the Army’s underwater and atmospheric nuclear tests between 1945 and 1962.
“I didn’t know anything about it,” Schafer said. “I thought, ‘This is my niche. This is what I want to do.”
He had not personally experienced any obvious health problems related to his time in the South Pacific, other than possibly COPD, he said. But he was very worried about the issue.
Before long, he was the commander of the state of Oregon and began searching for atomic veterans throughout the state.
A local Veterans Administration representative provided him with the names and phone numbers of atomic veterans, but otherwise Schafer’s efforts were largely relegated to word of mouth and putting up signs in VA and Legion hallways around the world. condition.
Over the years, state membership grew to 70, but Schafer estimates that was only about 10% of the actual number of atomic veterans in Oregon.
By 2013, Schafer was a national commander. He had established a regular schedule: quarterly state meetings held in Portland, Albany, or Lebanon, and sometimes in Bend.
NAAV has been very active in keeping the interests of atomic veterans in front of government officials, he said, which is one reason he is now deputy commander at the national level. Current Minnesota Major Keith Kiefer is based closer to Washington, DC and is better situated for lobbying and other needs, Schafer said.
“He’s very active on the bills.”
President Joe Biden recently signed a three-year extension to the Radiation Exposure Compensation Act, an agreement that allows veterans to file claims with the Department of Justice, and NAAV is working to get Congress to extend it another 15 years, Schafer said, adding that it provides relief for anyone with a suspected cancer related to nuclear exposure: “cleaning men, people on nuclear ships, anyone involved in nuclear power.”

In 2016, the NAAV arranged for members to visit the Nevada Test Site Nuclear Memorial outside Las Vegas and he wants to do it again, Schafer said.
“We went there for one of our conventions and took a group to the test site. They put us in places on the testing ground that normal tourists can’t see. There were 81 of us on the bus: wives and soldiers. They said it was the biggest group they’d ever had.”
Many of the group’s efforts focus on raising awareness.
On January 1, 2018, the portion of Interstate 5 that begins in Albany and ends in Salem was designated the Atomic Veterans Memorial Highway, as a result of the NAAV’s efforts.
And, like many states, Oregon has permanently designated July 16 as a day to honor and remember the sacrifices made by atomic veterans.
Not only are many veterans unaware of the NAAV, but Schafer said many are unaware of the medical options available to them, or even the fact that they are no longer bound by secrecy: “In 1996, President Clinton freed us” with the repeal. of Secrecy Agreements and Nuclear Radiation Acts, which allow atomic veterans to speak about their experiences, particularly to establish the validity of a service-connected disability.
In recent years, the Oregon NAAV group has also become heavily involved in helping the Marshallese who live in the state and in whose homeland the US conducted 67 nuclear tests between 1946 and 1958: 23 on the atoll Bikini and 44 near Eniwetok Atoll. whose consequences spread throughout the islands.
One test in particular, “Castle Bravo” on March 1, 1954, produced an explosion 1,000 times more powerful than the atomic bombs on Hiroshima or Nagasaki, spreading traces of radioactive material as far as Australia, India and Japan, and even the United States. and parts of Europe, and prompted international calls to ban atmospheric testing of thermonuclear devices.
It also rapidly produced cancers and other diseases among members of a Japanese fishing boat that was nearby when the detonation occurred, coming into direct contact with the radioactive fallout.
Radioactive fallout from the explosion spread to inhabited atolls in the Marshall Islands, which were evacuated 48 hours after the detonation.
When the islanders returned three years later, they found that their previous staple foods, including arrowroot, makmok, and fish, had either disappeared or caused various illnesses in the residents, and were taken away again.
Ultimately, 15 islands and atolls were contaminated, and in 1963, natives of the Marshall Islands began to suffer from thyroid tumors and many birth defects were reported.
Later, the US also dumped 130 tons of soil from an irradiated Nevada test site on Enewetak Atoll in the island chain.
Since they have been forced to live elsewhere, Schafer said, many of the Marshallese have resided in Oregon and other states.
Schafer said the “7,000+” Marshallese in Oregon have “become my new family.” He also frequently visits Arkansas, where the island’s 16,000 former residents live.
“I met the president, the king, many of the officials. I have met several of his dignitaries.

Schafer said Oregon was the first state in the union to reinstate medical benefits for islanders, in 2016, and credited then-state Rep. Sherrie Sprenger with helping in that effort. In 2020, the federal government followed suit, reinstating Medicaid for Marshallese and other Pacific Islanders living in the US.
“They were very mistreated,” he said of the islanders’ plight as a result of treaties with the US government that prevented them from getting government health care for decades.
Schafer said those treaties, “the deal (the US government) gave them to destroy the land,” also prohibited islanders, some of whom have lived on the mainland for generations, from employment beyond the “ordinary workers”, and could not have a driver. licenses
Since 2014, Schafer and others have arranged for the Marshallese to appear, with a 30-foot-long traditional canoe, in the Albany Veterans Parade.
“All I have to do is tell them, ‘Veterans Day is coming up.'”
Although COVID shut down MAAV’s activities for the most part, Schafer said he’s looking to get everything back up and running in 2023, though, he noted, the numbers are declining.
“One of our board members is 98 years old. We are dying pretty fast. I would imagine there are still 20-30 members (in Oregon), but there are probably 2,000-3,000 atomic veterans in the state,” he said. “There were 250,000 military personnel and 250,000 civilians involved in these tests.”
Among the members of the national board is another resident of Lebanon, Treasurer Frank Farmer.
Many veterans are simply unaware of the group’s existence, Schafer said. He plans to continue working on awareness.
“I just enjoyed taking this and running with it,” he said. “I’m very active. My VA doctor tells me, ‘You’re in the top 10%, Fred.’
“I’m busy.”
Anyone interested in learning more about NAAV can contact Schafer at (541) 258-7453 or via email at derf@trcschafer.com.