From the balcony of his house in the Sweida countryside in southern Syria, Ghassan Hamed puffs on his cigarette and says with a rueful sigh: “A few decades ago, we used to see Rhim’s gazelles around the village, sometimes even approaching the houses in search of food. No one used to bother them, until the game swooped down on the area and started killing these beautiful creatures, so they moved away from our villages and disappeared.”

Ghassan, 75, explains that during his childhood and youth he used to see these gazelles in many areas of the Sweida countryside. His neighbors and those around him used to feel optimistic when they saw them. He says: “But today they have become a memory that we remember with sadness when we see the painful images of the massacres committed against them circulating on social networks.”

The photos were posted by various people from the governorate through their Facebook pages, bragging about what they have “accomplished” in hunting and capturing large numbers of these gazelles. They have even gone so far as to show off the various types of weapons and huge cars they used to help them move in the middle of the desert, where the Rhim gazelle usually resides.

Hunters capture and kill the endangered Rhim gazelles, either for food or for taxidermy.

The Rhim gazelle is also known as “al-Daraqiyyah” (Arabic term related to the thyroid gland) due to the swelling of the neck and throat of the males during the mating season. It is a type of gazelle that is capable of running very fast and is characterized by its graceful body, beautiful color, and ability to climb and maneuver. They also tolerate high temperatures and low water.

Rhim’s gazelles typically live on sandy and gravelly plains as well as limestone plateaus. the most prominent The places of their presence include the Arabian Peninsula, Russia, Pakistan, Afghanistan, Iran, Tibet, Mongolia, Iraq, the Caucasus, Turkey, southern Syria and Jordan. It is critically endangered, according to the International Union for Conservation of Nature (IUCN).

An environmental activist in Sweida who preferred not to be identified says that Rhim’s gazelles were previously present in large numbers in the governorate. This place is considered his home, since they have always been present on the outskirts of Sweida and in the border towns near the desert. In the seventies of the last century, they were present in the plains of the town of Era and the area of ​​Tal al-Hadid.

“But after the entry of weapons and game into the region, their numbers began to decline and they settled in more remote areas. In the post-2000 period, their presence in the eastern border villages was limited only to the outskirts of Badiya. (the Syrian desert), and then they almost disappeared,” he tells Raseef22.

The activist goes on to say that after certain incidents began to occur in the Badiya Sweida region between 2015 and 2019, which included security tensions and attacks by the Islamic State, these gazelles had an excellent opportunity to reproduce, due to the absence of hunters. of the area. It is said that at one time there were even herds of endangered gazelles numbering in the hundreds, but this bliss did not last long as once things settled down and the area stabilized, the hunters returned, committing much more ruthless massacres. than before, as their photos and conversations reveal. 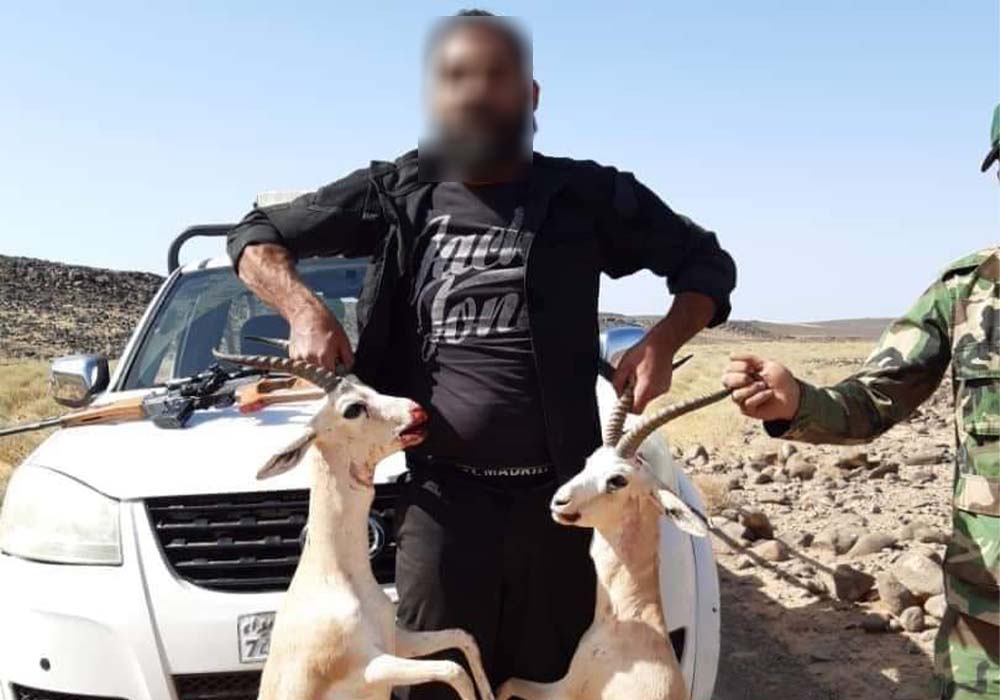 He adds that the hunt takes place in the eastern desert of Sweida Governorate in the eastern Zulf region, and it is not possible to determine the number of gazelles affected by this, but it is certainly in the hundreds. The activist then adds: “The hunters used to hunt in April to catch gazelle calves after they were born. But this year they have not shown any consideration or respect for the sanctity of hunting. They have violated the law issued by the Ministry of Agriculture regulates hunting, which prohibits the hunting of any wild animals other than pigs. Some of them even sleep there to hunt and kill as many as they can.”

As for the uses of this gazelle, he explains that they are hunted for food, taxidermy or for their skin. They also keep gazelle calves alive for sale, and sometimes one of the gazelles is injured so they treat it before putting it up for sale.

“A few decades ago, we used to see Rhim’s gazelles around the village, sometimes approaching the houses in search of food. Nobody bothered them, until the hunters swooped in and started killing these beautiful creatures, so they disappeared “.

Speaking to Raseef22, engineer Ahmad Aydak, who specializes in wildlife and biodiversity, explains that Rhim gazelles (scientific name: Gazella subgutturosa fag), used to be present by the hundreds in Syria. They inhabited the Syrian desert of Badiya in large herds until the end of the fifties of the last century, but unfortunately they became extinct due to the greed of the hunters.

Faced with this serious decline, according to Aydak, Syria tried to restore the presence of this animal on its land by transferring Rhim gazelles from the King Khalid Wildlife Center in Saudi Arabia in December 1996, to the Talila Reserve, 20 kilometers southeast of Palmyra ( Tadmour). In the same month, this reserve had also received the Arabian Oryx antelope from the Shaumari Wildlife Reserve in Jordan. The gazelles were then distributed among environmental reserves in Syria under the supervision of the General Authority for Badiya Management and Development, but they were not meant to live long. Most of them were killed during the war, while some of them fled.

The Rhim gazelle is the only creature to benefit from the war, as security operations in the region helped protect it and its numbers flourished.

Regarding their presence in the Sweida Badiya desert, Aydak explains that there are small pockets where these animals have been present for a long time and they do not come from the Talila Reserve. He goes on to state that the Rhim is the only creature to have benefited from the war, as security operations in the region have helped protect it, and its numbers have blossomed into the hundreds in packs.

As for the current hunt taking place in Sweida, he describes it as “mass extermination”. The most prominent reasons behind this are the economic situation as well as the hunters bragging and competing to kill the largest number. In his opinion, the worst problem lies in the focus on killing and selling the youngest of these animals so openly. The price of a young gazelle reaches about three million Syrian pounds (about 600 US dollars according to the unofficial market exchange rate), while that of a large one is around one million pounds, which means that the situation in the Badiya desert of Sweida indicates that the number of these animals may reach the brink of extinction. 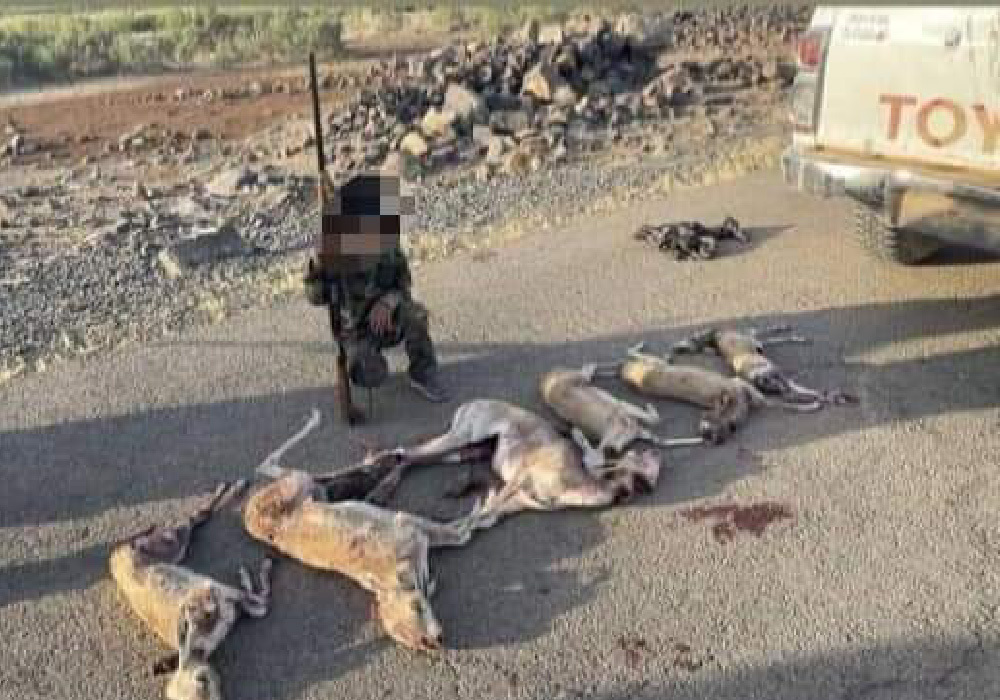 To protect this gazelle and other animals, the Syrian Minister of Agriculture issued a decision earlier this year, which prohibited the hunting of game animals of all kinds for a period of one year, from February 27, 2022 to February 26, 2023. The decision only allowed the hunting of wild boar during the hunting season, but unfortunately the hunters did not abide by this decision, or any other for that matter. Illegal hunting operations have continued without any control.

The current hunting in Sweida is ‘mass extermination’. The most prominent reasons behind this are the economic situation and hunters bragging and competing to kill more. The worst problem lies in the slaughter and open sale of the youngest of these animals.

The Rhim gazelle is also endangered in Jordan. A scientific study on endangered species has concluded that Jordan has three globally threatened species, specifying them as “the Rhim gazelle, the Dorcas gazelle and the mountain gazelle” within the Red List of Critically Endangered Species prepared by the International Union for Conservation of Nature.

gazelles in Iraq also suffer from similar conditions. This year saw a significant decline in their numbers due to lack of food and water despite being on dedicated reserves.

It is an unfortunate reality that this gazelle suffers from, as it is native to the region, so much so that many of the cuneiform, Assyrian, and Akkadian inscriptions and writings in ancient Iraq refer to it. This graceful creature was also mentioned by the Nabataeans in their drawings and archeological ruins. It was considered one of the most important animals in their daily life and diet, as their skin was used to make shoes, and they were also used to make milk and butter.