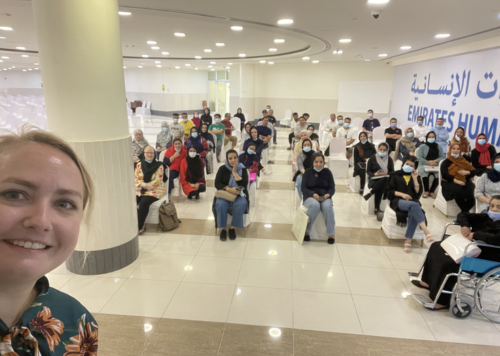 Jordan Jones is a volunteer lawyer working with the ABA’s Afghanistan Response Project to help Afghan judges, prosecutors and other rule of law professionals move from the Emirates Humane City to welcoming jurisdictions.

Following the first anniversary of Kabul’s fall to the Taliban on August 15, the ABA Journal highlights the ABA’s efforts to help judges, lawyers and others from Afghanistan resettle, obtain immigration benefits and secure jobs using their legal skills. This is the third part of our series.

For about eight years, Qari Abeera Ziayi lived in Herat, Afghanistan, working on hundreds of cases involving violence against women and children, criminal and civil matters, and divorces.

In addition to being a lawyer, she advocated for human rights and taught as a university professor. She also volunteered to help children with disabilities at school and underprivileged women with the art of hand embroidery.

“Since my childhood, I wanted to serve society and people with honesty, and I found that law is a field that could connect me with my dreams,” says Ziayi. “So I chose the field of law and for a long time I served people a lot through law.”

Due to her work, Ziayi became a target of the Taliban even before the fall of Kabul in August 2021. Members of the group threatened and attacked her and her family on several occasions. They threw grenades and bombs at her house. They broke the windows of her house and her car. They also beat her elderly father.

When the Taliban took over Afghanistan, Ziayi felt she had no choice but to flee.

“I was hiding in dark rooms, away from sunlight, in the city of Kabul for three months, and the terrorists searched hard to find me and kill me,” she says. “They called me several times and were trying to locate me, but I changed my place of residence several times. The Taliban were looking for me everywhere.”

Ziayi left her country in October 2021 and, through a foreign organization that helped female lawyers facing danger in Afghanistan, was taken to the Emirates Humanitarian City. Run by the government of the United Arab Emirates, the temporary camp housed thousands of Afghan evacuees.

That’s where Ziayi finally met Jordan Jones, a volunteer attorney who works with the ABA. Afghanistan Response Project to help Afghan judges, prosecutors and other rule of law professionals relocate from the Emirates Humanitarian City to welcoming jurisdictions. Jones is the director of legal affairs for the Humanitarian Legal Assistance Project in Washington, D.C. 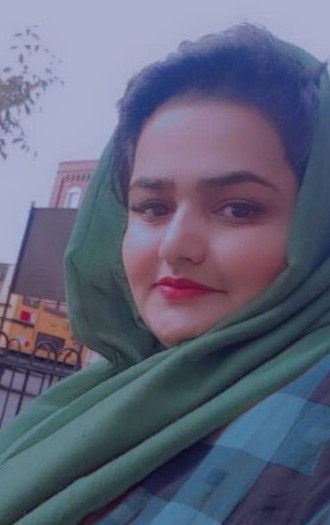 “Since my childhood, I wanted to serve society and people honestly, and I found that law was a field that could connect me with my dreams,” says Afghan refugee Qari Abeera Ziayi.

Jones traveled to the United Arab Emirates with David Dettman, director of outreach and communications for the ABA Center for Global Programs and coordinator of the Afghanistan Response Project, and other ABA staff and volunteers. for the first time in March.

As part of a new initiative, they established an intake process to screen Afghan evacuees; determine which countries would be the most suitable for them; and match them with pro bono lawyers in those countries. They worked with about 250 Afghans and began to assess their chances of moving to the United States. His options included requesting humanitarian paroleor if they previously worked for the United States government, special immigrant visas.

In July, Jones made a second solo trip to the United Arab Emirates and spent a week meeting with hundreds of other Afghan legal professionals. Some of them were judges who jailed Taliban members, while many others were prosecutors and lawyers who had spoken out against the group.

Jones sought out unaccompanied female judges and lawyers, including Ziayi.

Ziayi had been living in the Emirates Humanitarian City for more than nine months. She worried about family members still trapped in Afghanistan and about her own future. She battled depression and thyroid disease, a condition she says worsened while she was at camp.

“It was very difficult for me to live in the United Arab Emirates because my family was not there with me, nor was our destination known, how and when I would leave that camp,” says Ziayi, who decided that she wanted to resettle in the United States. states “I consider America a noble and advanced country, where I can get a better education, better jobs, a more peaceful life, and good opportunities to serve the people.”

Jones advocated for Ziayi to receive port parole, which U.S. Customs and Border Protection officials can grant to vulnerable and at-risk people at ports of entry. She explains that Abu Dhabi is one of 16 places outside the United States that serves as a port of entry and the only place with a refugee camp for Afghans.

“Unlike humanitarian parole through its partner agency, [U.S. Citizenship and Immigration Services]port parole is free, and can be granted by a CBP officer at their discretion after an interview,” Jones says, adding that humanitarian parole applications have taken more than a year to adjudicate due to backlogs.

CBP granted Ziayi’s request. She entered the United States in August, first staying in a refugee processing camp in Leesburg, Virginia, before being transferred to Buffalo, New York. Jones is now helping her with her asylum application.

In the past year, Dettman has seen the number of Afghan evacuees trapped in the Emirates Humanitarian City drop significantly, from around 14,000 to around 4,000.

“This is due to a broad coalition of pro bono lawyers, NGOs [nongovernmental organizations] and activists who have worked with Afghans on the ground and while advocating within many host governments to accept evacuees,” says Dettman.

Since his initial visit to the Emirates Humanitarian City, Dettman estimates that Jones and other pro bono attorneys affiliated with the Afghanistan Response Project have helped about 500 evacuees in the camp. But, he says, many Afghans remain in limbo in other countries and need help with permanent placement.

“The most pressing challenge facing this project is the fact that the news cycle has moved on, while many Afghan evacuees have not,” says Dettman. “There are tens of thousands of Afghans who are still without permanent citizenship. While Afghans in EHC are finally starting to relocate, we cannot forget about those who are still stuck in third countries or, more pressingly, those who remain in hiding in Afghanistan.”

The Afghanistan Response Project plans to use the intake process developed at the Emirates Humanitarian City to help other Afghan evacuees in similar situations around the world and needs more pro bono lawyers to assist in this work. Dettman asks for his time and patience as Afghans must navigate complex and ever-changing immigration systems.

Dettman adds, however, that the Afghanistan Response Project, and its three threads, are an amazing example of what the ABA and its members can do.

“Helping Afghans seeking refuge abroad, providing immigration assistance to those in need here, and helping settled legal professionals find meaningful work are, in my opinion, what is best about the ABA,” he says. . “While working on a project like this can be very frustrating, the courage and determination we see in Afghan evacuees and the selflessness of pro bono attorneys and others continues to be an inspiration to me.”

Ziayi hopes her family can leave Afghanistan and join her in the United States. She also hopes to return to Virginia, where the climate is warmer, and study law so she can continue her career.

“My hope for the future generation and for all the people of the world is peace, justice, progress and security,” says Ziayi. “I wish I could continue my higher education in the United States, get my law license here again, become a member of the ABA in the near future, teach at a university, and have more good goals in these fields.”

Attorneys who are interested in volunteering with the Afghanistan Response Project should contact Dettman directly at [email protected].

ABAJournal.com: “Advocates are helping Afghans apply for asylum and other immigration relief with the assistance of ABA”

ABAJournal.com: “The ABA project aims to help Afghan legal professionals establish themselves in the United States”