Filariasis is a major global public health problem and is endemic in India. [1]. The causative agents are nematode worms. Wuchereria bancrofti Y malay brugia. It is the Culex mosquito that transmits the disease [2]. Diagnosis is usually made by demonstrating microfilariae in three consecutive peripheral overnight smears. [3]. Despite the high incidence in India, the occurrence of filarial nodules and their diagnosis by lymph node fine-needle aspiration cytology (FNAC) is unusual. [4]. In our case, the FNA of the right supraclavicular lymph node revealed an incidental finding of microfilaria without symptoms of filariasis or microfilaremia.

Information of the patiente

Local examination revealed a palpable lump 2 cm × 2 cm in size present over the right supraclavicular region. It was firm, non-sensitive and mobile. It was shaped like a globe. There were no skin changes over the lump. There was no bleeding, discharge, or local temperature rise. Systemic examination was within normal limits.

Timeline of the current episode

The patient had complained of swelling on the right side of the neck and an increased night temperature for the past six months. She described feeling sharp tingling sensations in the swelling at night. The patient had generalized weakness. She gave a history of weight loss and loss of appetite in the last two to three months. She had no history of trauma, diabetes mellitus, bronchial asthma, tuberculosis, or hypertension.

USG of the neck revealed a few (2-3) subcentimeter enlarged lymph nodes in the right supraclavicular region, the largest measuring 1.7 mm × 9 mm. Few of them showed loss of fatty hilum. The complete blood count was normal. Peripheral smear examination revealed a normal cell count and morphology with no abnormal findings. The ESR was 19 mm/h. The patient received a provisional diagnosis of a case of cervical lymphadenopathy under evaluation.

The patient was then advised to undergo USG-guided FNAC. The aspirate was scanty and hemorrhagic. The smears were examined under a microscope.

A diagnosis of filariasis with reactive lymphadenopathy was made on the basis of cytology of the lymph node mass. In the patient, FNAC lymph node smears were cellular (as can be seen in Figure 1). They revealed a mixed cell population of small and large lymphoid cells, with predominantly mature lymphocytes, many histiocytes, stainable body macrophages, and occasional eosinophils. A sheathed, coiled and slightly curved microfilaria was observed (Fig. two). The background contained red blood cells (RBC). 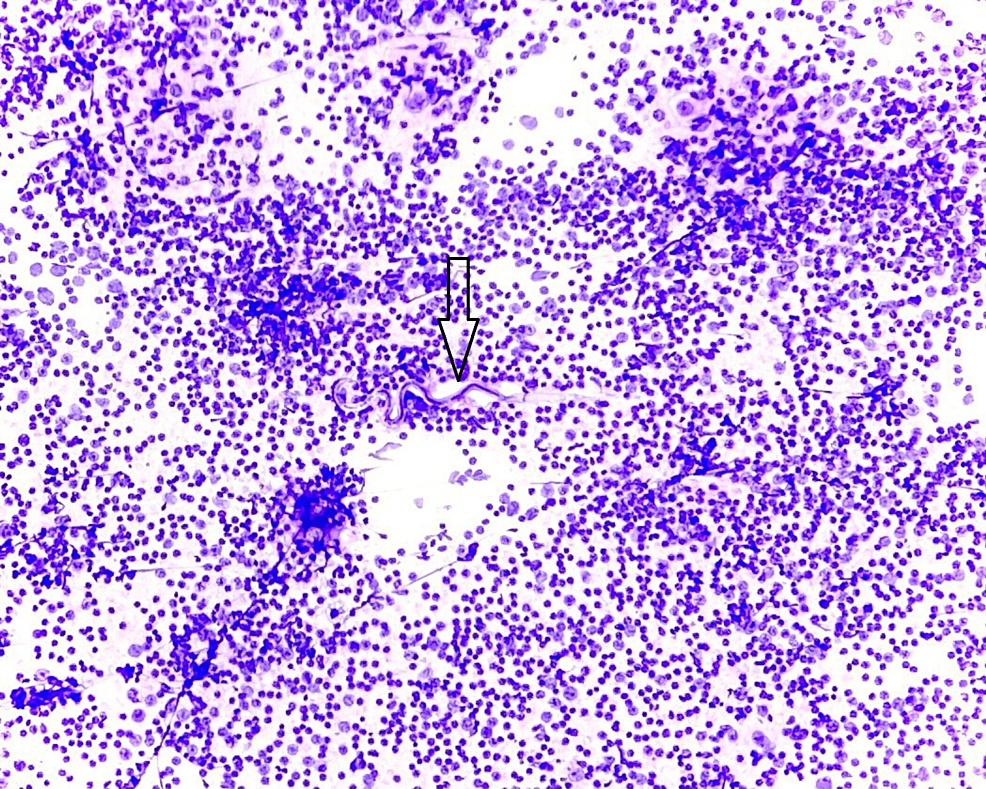 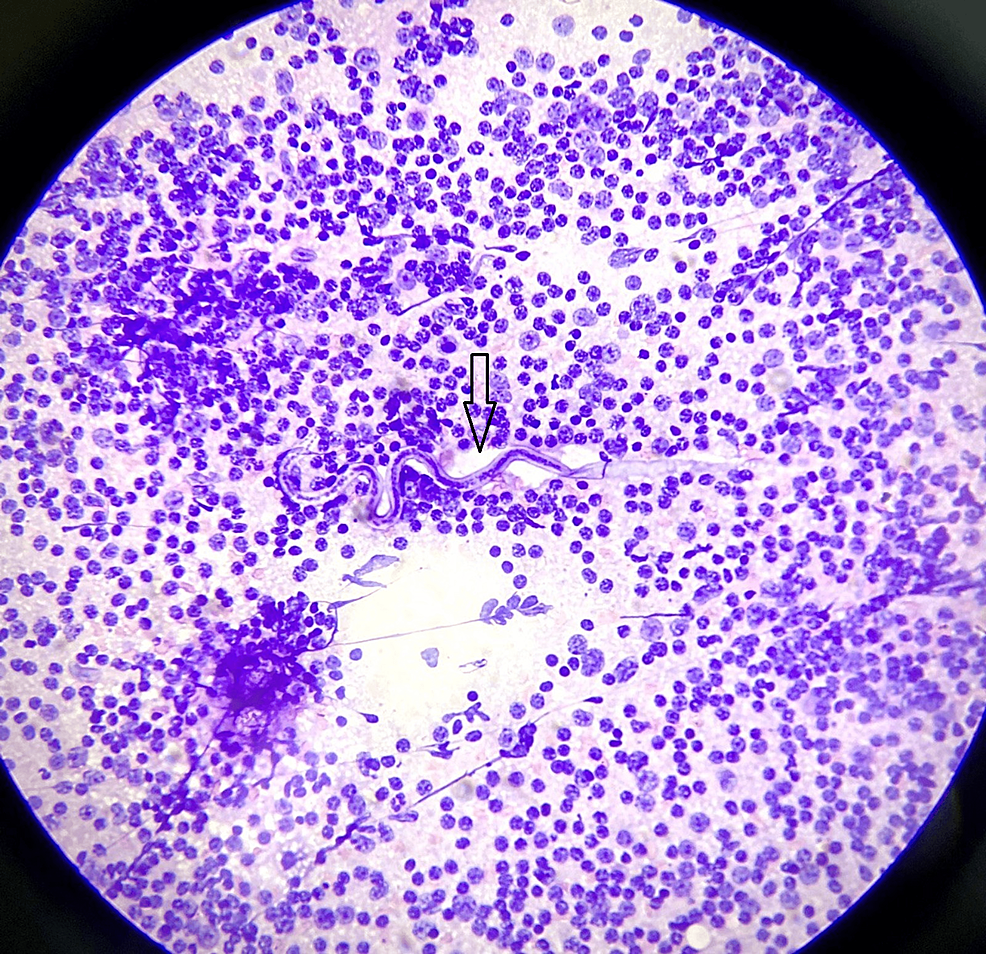 The number of people harboring microfilariae is estimated to be in the millions, with a significantly high number of people suffering from manifestations of filarial disease. [5]. Filariasis cases are widely distributed in the tropics and subtropics of sub-Saharan Africa, Southeast Asia, India, and the Pacific Islands. The largest number of cases was reported in India. Filariasis is a term for infection caused by any of the filarial worms; however, in daily practice, the term filariasis is indicative of lymphatic filariasis caused by species of Wuchereria or Brugia. The vector used for transmission was the Culex mosquito. Microfilariae exhibit nocturnal periodicity in peripheral blood. It presents as elephantiasis in the later stages of the disease. Peripheral blood test shows motile microfilariae parasites in overnight blood samples collected between 10 p.m. and 4 a.m. [6].

The circulating filarial antigen (CFA) screening test is now considered the gold standard for the demonstration of microfilarial organisms. There are limited reports in the literature addressing the importance of FNA as a diagnostic tool for filariasis. [7]. FNAC is not routinely performed for the diagnosis of clinically suspected filariasis. However, incidental detection of fine-needle aspiration cytology smears has been reported. [8,9]. In cases of elephantiasis, occult filariasis, lymphangitis, and early stages of allergic presentations, microfilariae may not be seen on peripheral blood smear examination. [2,10].

There are rare case reports of incidental findings of microfilariae in cytology smears of thyroid nodules, bronchial aspirates, axillary lymph nodes, pericardial fluid, and breast lesions. [3]. Our patient had swollen supraclavicular lymph nodes on the right side without any clinical presentation of filariasis.

In our case, the presence of microfilariae in the lymph node FNA was an incidental finding, highlighting the importance of performing an exhaustive screening in patients in whom there are no clinical manifestations of filariasis and microfilaremia in the blood. [11].

In endemic areas such as India, the association of microfilariasis should be considered. Fine-needle aspiration cytology can be a sensitive, cost-effective, and invaluable tool for the detection of helminthic etiology in unexplained lymph node masses. This emphasizes the importance of careful screening of cytology smears for microfilariae in patients without clinical evidence of microfilaremia. This will help provide accurate and timely treatment to patients.