Week two went to the next level in the drama and strength of the north-south conflict. Despite the tally of wins and losses, the South made up some ground.

The No. 1 North (Ireland) struggled to put up an experimental version of South Africa (No. 2 South), their attack blocked and depending on marginal passes, looking exhausted in the last ten minutes and as if the final whistle had not come. too soon. even infuriating his hometown crowd by his brazen ways of killing time in the last three minutes.

The No. 2 North (France) had to rely on a last-minute defense by the excellent Damian Penaud over three Wallaby defenders to sneak his victory over Australia (No. 3 South).

Scotland worked for a win over Fiji.

England (No. 3 North) had all they could against No. 4 South (Argentina); in the end, they somewhat meekly gave up on their home patch.

Roar rugby pundits Brett McKay, Harry Jones and Jim Tucker team up for another instant reaction from the Wallabies’ spring European tour, a heartbreaking 30-29 loss to France in Paris.

South No. 1 New Zealand absolutely beat Wales, as they should, really, but they seem to do it more definitively than power teams manage to do.

At home, the top three teams in the North would be expected to win more convincingly. Two squeakers won; lose one.

Much of that came down to play at scrum-half. A rearranged Nines power ranking this weekend:

Side: Jock Campbell did very well in his main roles, except for that last entry. In that situation, defense is to be expected; but the hips are in a fairly fixed position because the space has been reduced.

Chest to hip, head to butt, and launch, son. Beauden Barrett was very good, but he was cashed, which is going to be my veto card. Willie le Roux played at full-back and almost led the Boks to what would have been a disappointing win (for the hosts) over the Irish, who were well served by the suave Hugo Keenan.

But my fullback of the round will be French No. 15 Thomas Ramos, who not only kicked with amazing precision, but was also full of speed with the ball in his hand. In close Tests, goals will almost always make the difference (see South Africa’s loss). For utility booking, note le Roux. 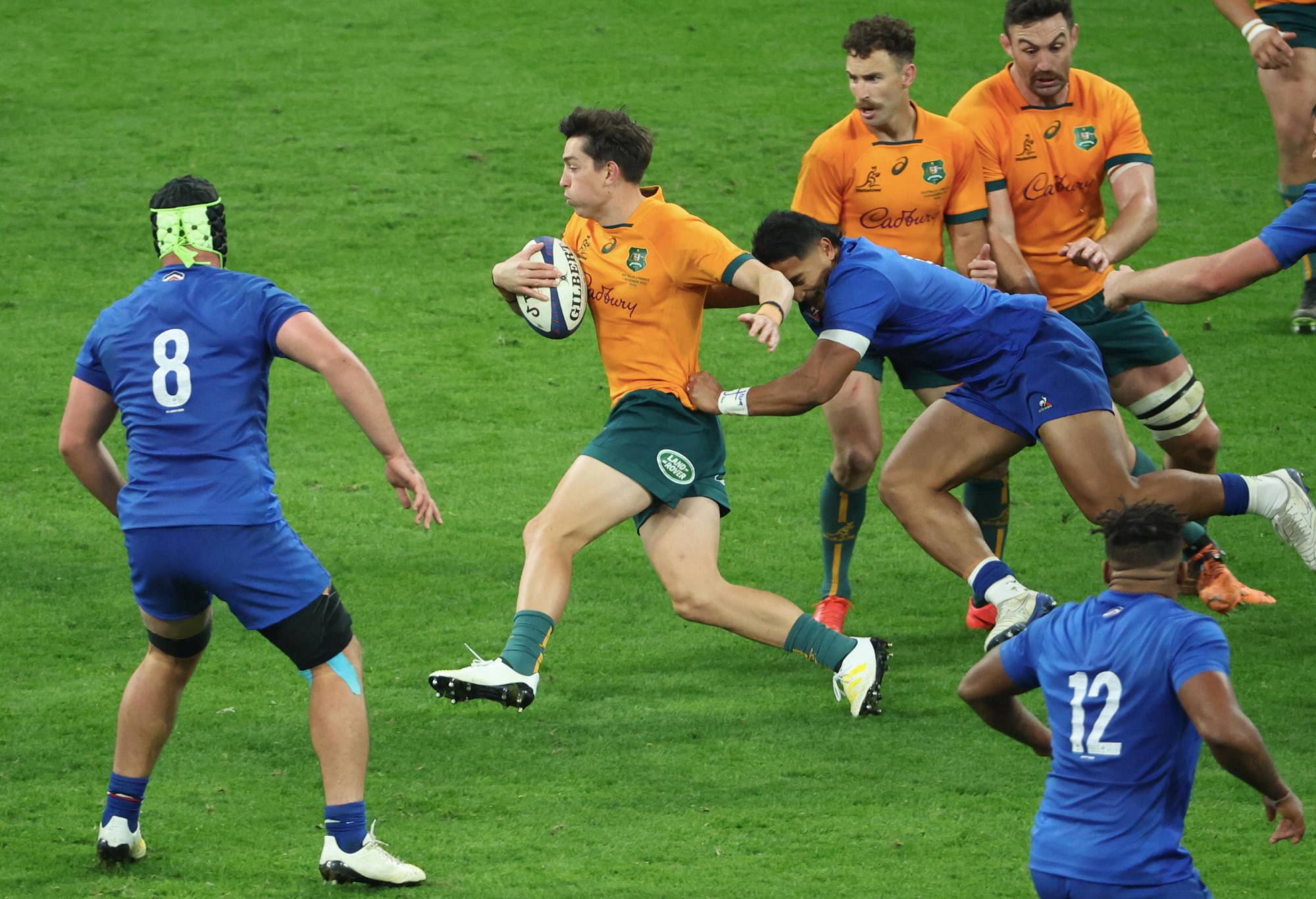 Jock Campbell of Team Australia in action during the Tour d’Autumn match between France and Australia at the Stade de France on November 5, 2022 in Paris, France. (Photo by Xavier Laine/Getty Images)

On the right: Damien Penaud. That is all.

Outer Center: Here we have several strong candidates. There’s Rieko Ioane, who isn’t 13, who keeps beating ‘proper’ centers but doesn’t get picked for that pass.

Len Ikitau made a statement. Facing the formidable Gael Fickou, his clever kicks and passes were perfect. Garry Ringrose held the Irish midfield, despite four missed tackles, because those hits were forays and therefore ‘good’ misses. But we will play 10/10 against Puma Matías Moroni in No. 13, because he read the game very well.

Inner Center: Lalakai Foketi looked like the Man of the Match until he stopped injured. Damian de Allende cut through heavy Dublin traffic and overcame four defenders. Jordie Barrett seems to be here to stay; but he would fit in nicely on the bench during the week. Jonathan Danty is an excellent player on both sides. Jerónimo de la Fuente made 11 good tackles. Choose any of these without dispute. But I have to choose one. I will go with Danty, who was key in the French escape. I’ll nickname him Papillon, now.

On the left: The strange story of Mack Hansen continues. Doesn’t seem like the answer, but maybe you don’t know the right question. His seven carries and his 53 meters were adventures.

Joe Cokanasiga showed brief moments of why poor ($1.5 million) Eddie Jones believes in him. Darcy Graham ran 83 meters on just 11 eventful carries against the mighty Fiji. But our left wing will be Emiliano Boffelli’s super boot with his 25 points (not just the boot) at Twickenham. What Rassie Erasmus would have given for that kind of kicker-winger. 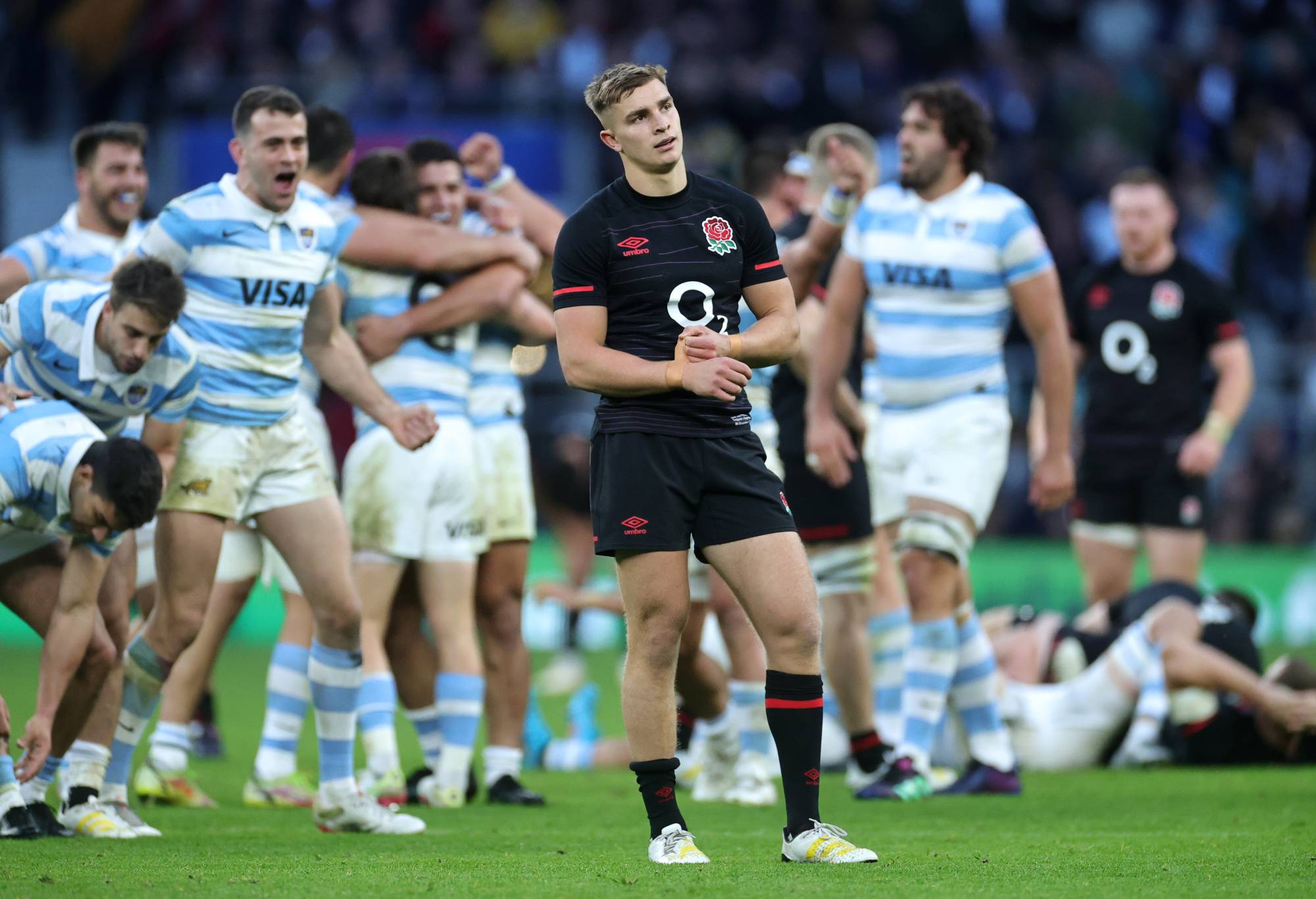 Flyhalf: Richie Mo’unga, Jonny Sexton and Santiago Carreras have a real battle here. Mo’unga was on a mission. Carreras skinned Marcus Smith and Owen Farrell. But Sexton was the difference in the Irish win over South Africa and has been the difference for his team in most of their biggest wins. He is older than Morne Steyn (who would surely have denied it) but somehow indestructible. Mo’unga will be benched as a reserve ten, which means I’ll have to choose between Barrett and le Roux for player 23.

Medium: Nic White beat Antoine Dupont. He caught it. He charged at him. He made him nervous. Maybe it was Raynal Revenge. Gonzalo Bertranou continued his sizzling form from 2022. He made the most of the Rugby Championship teams. He was immense in the delicious victory of Michael Cheika’s masterpiece over Randwick’s rival Jones.

But Jamison Gibson-Park played starting minutes off the bench to spark the Irish inactive phase attack; Faf de Klerk and Jack van Poortvliet did the same for their teams. Overall, it was a good weekend for the runners game. But Aaron Smith showed why no one should write him off just yet, he loves playing at Cardiff, and when he over-praised Dupont, there was a hidden advantage to it. Stay tuned.

Yeah, well that won’t work. So I will make the decision that even though Doris provided 12 strong carries and that magic moment on the right sideline to allow a team to try, and even though I often find myself thinking that Alldritt is the best player in this wonderful French team; it is Savea who takes it at eight.

blind side: These guys worked. Shannon Frizell continues the search for her to answer the problem of ‘who is our next Jerome Kaino’. Pieter-Steph du Toit was tireless and returned to something like the 2019 form of his in Dublin. But Marco Kremer made about 20 tackles and they weren’t just small stops. He is finishing races.

Open side: Michael Hooper showed why he is an all-time great Wallaby. He was flying in France. Dalton Papali’i’s new hair seems to do it faster. But hats off to Josh van der Flier, who found a way to score a try in the woods with tanks rolling over him. He also made 15 of 15 tackle attempts against the Boks, who made quite a few line breaks.

To close: We live in a Golden Age of locks: athletics over 2 meters and smart too. Choosing two will be difficult; heck, even three is a hassle. Richie Gra got a taste of rugby again (15 of 15 tackles), who surely would have made it harder for the Wallabies last week. Lood de Jager lost his shoulder again early in Dublin; Enter Mr. Fix It Franco Mostert, who did very well to score an excellent try, hit the most rucks and make ten tackles.

The bad games of Eben Etzebeth are the best games of most other locks. He made a peach of a volley attempt assist to Kurt-Lee Arendse, made all 16 plate attempts and carried a dozen times. But was he outclassed by James Ryan? Ryan had a key lineout steal from Etzebeth, but he also made a brutal 14 tackles; it was his best game since Andy Farrell took over.

Will Skelton had a great cameo. Sam Whitelock made 13 tackles and ruled out the lineout; Is he the real captain of the All Black now? And Thomas Lavanini? I met a classmate of his in Dublin, actually the daughter of a neurosurgeon, who told me that Lavanini is a lovely guy. But you had to see her; and then you would know this was compromised information.

Puma’s great executor outclassed all English blocks. All of them. It’s a tough pick here, but the quality of the opposition has to be factored in, so it’s Ryan and Etzebeth in an odd pairing, with Mostert in a jersey he’s familiar with: number 19.

Stingy Support: Tyrel Lomax and Taniela Tupou seem to be the best here. It wasn’t a week for the three of them. French, Irish, English and South African accessories did not have their best performances. Lomax, on the other hand, had 57 good and hard minutes. The revival of the Kiwi prop is becoming one of the stories of 2022. But he will be in our hot seat, with Queensland hero Tupou in absolute flames in Paris. He came back with a vengeance and dominated a tackle so well that I have yet to see what an unlucky Frenchman he was.

Bitch: Julian Montoya should get a lot of credit for the win at Twickers, but just for playing, I thought tireless athlete Dan Sheehan and resurgent Codie Taylor topped the list. Dave Porecki gets an honorable mention. He is such a neat player. Sheehan or Taylor? Tomato-to sauce, tom-arto ($3 type). I’ll start with Sheehan, who took on Malcolm Marx, no mug.

loose head: The battle at Aviva was so grueling and tough that even the props seemed to fall off. Also, the way the scrums were awarded left all the fans in the stands scratching their heads. The Twickenham scrums were no better. Tomás Gallo is a beast with the ball, but he tyrannizes without it. So once again we turn to an Australian and a New Zealander: Ethan de Groot and James Slipper. Slips wasn’t perfect at the scrum, but he won the crucial first call and that matters a lot away from home in the Paris nightclub with DJ Peyper.

Team of the week:

Coach of the round: Michael Cheika.