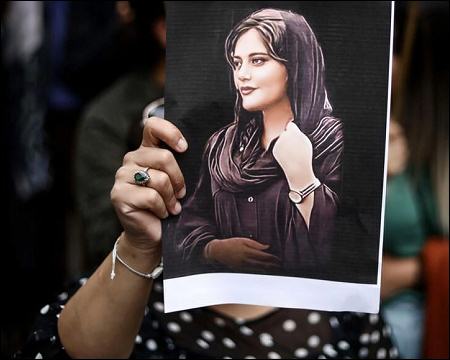 A photo of Iranian Kurdish woman Mahsa (Jina) Amini, 22, who died on September 16 after being detained by Iran’s morality police who were enforcing strict Islamic rules on hijab, in a protest against her murder, September 2022. Photo: AFP

This 1001 word essay is dedicated to jinathe symbol of contemporary women and freedom, and her mythical counterpart Shahrazad, who fought a tyrant through storytelling for 1001 nights.

A few months after leaving Hell in the East, I was asked how strange I felt in my haven, the West. I left the house because I felt weird, was my immediate response. While there is no such thing as a perfect home for someone constantly searching for something better, Hell in the West had ended with a Renaissance a few centuries earlier. In contrast to what I had experienced in the East, I felt that a more evolved subspecies of homo sapiens was leading the West. I dreamed of a new rebirth in the Hell I left.

Three friends and I were looking for a new homeland. It didn’t matter where, we just wanted to get out. Since the path and the destination were uncertain, my friends were less risky and changed their minds. I left alone Everyone soon regretted staying. The younger a person comes out of hell, the more chances they have to adapt and make a new life. One of my friends left much later and felt that he was behind and that he should have done it years ago. Another submitted to Hell, became his superficial devotee, hired by him, climbed the ladder, but soon realized that he did not fit in and was imprisoned and lost what he had earned. The other friend did not tolerate the pain, he took refuge in the addiction and sadly lost his life because of it.

What was wrong with Hell? One might wonder. His laws would be the short answer. The core of the system was based on submission. One had to submit to who to be, what to believe, who to associate with, what to wear, what to eat and drink, etc. True life was impossible. It was not allowed to be and let be, grow and let grow, overcome pain and suffering, enjoy and let enjoy, or ultimately live life freely. The oppressive laws applied to everyone; the most disadvantaged people, such as women, ethnic, religious and other minorities, experienced a double oppression. A few decades later I realized why a prominent leader had coined the slogan “Jin, Jiyan, azadi”, or woman, life, freedom. Although he was not a liberal, but a socialist fighter for national liberation, he had legitimately coined this very liberal slogan that women, as a minority, constitute the first oppressed nation.

What a nation is seems subjective. I believe that the people of my origin constitute a separate nation divided into four countries. The part I was from is considered a territory of a multi-ethnic nation. Culturally, our people are close to the dominant nation there, but politically they are oppressed. for the 20the century many nations had been liberated. He hoped that ours would also be free once the oppression ends. Knowing that the result of oppression in Europe ended through the Renaissance, I had often expressed my hope that the 2North Dakotarebirth would happen in the Hell I left behind. Many movements in Hell had failed over the past two centuries, but the hopeful had carried the torch. Furthermore, through the patriotic and ambitious goal of the previous ruling dynasty, the country had moved towards industrialization and modernity and was almost ready for real progress compared to other parts of the oppressed world. It had its own shortcomings, such as restricting political freedom, but it had become almost a liberal society in terms of social and economic development.

As expected, finally in September 2022 on the 2North Dakota rebirth began with the loss of a precious life with a precious forbidden name, Jina. Interestingly, her name meant woman and life itself. Shortly after her birth, she ordered her parents to give her a name reflecting her dominant language. They accepted a beautiful name for her, however, it did not reflect her identity nor was it based on her self-determination. Jina was beaten and died for insufficiently “morally” covering her hair while she visited a strange city. Being a member of a gender, ethnic, and religious minority, her loss led to a unifying movement of all who felt outsiders in a country ruled by religious fanatics. One of Jina’s compatriots had once said “maji bo merden, bmara bo jian”, don’t live to die, die to live. Jina died, but her people stood up and began to feel alive again. 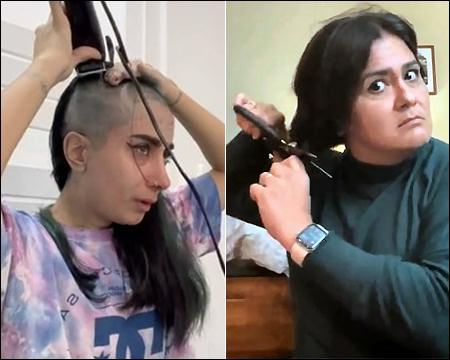 Women getting haircuts in a video to support Iranian protesters who oppose the leadership for the death of young Iranian Kurdish woman Mahsa Jina Amini, who died on September 16, 2022 after being detained by Iran’s morality police who applied strict Islamic rules on hijab, October 2022. Photo: SM Video/via Ekurd.net

Jina’s name and life encapsulated women, life and freedom. Not only her people but the world began to shout her real name. Her name might have been forbidden during the previous system as well, however, a progressive descendant of the previous conservative dynasty calls her real name, Jina, in her speeches now. The women burn their scarves and/or Cut their hair to honor Jina and her hair. Free-spirited musicians, singers, artists show their alliance with Jina in her work.

Moderate spiritual people, who believe in the separation of state and religion and see faith as a personal matter between the individual and a higher being, are dismayed by Jina’s death and support her Rebirth in their own way.

The youth, having observed via the internet what liberal societies are experiencing, wants freedom and is leading this new renaissance. They are rejecting many traditional obstacles. They honor their downtrodden bodies in words and actions; they reject the forced clothing of covering themselves from head to toe; some even honor their bodies by displaying them naked in public; some break other taboos by using profanity against their oppressors. At the same time, some are doing their best to maintain the status quo; they too will gradually notice that the ship has sailed and is on its way to its liberating destination, Jina Renaissance. Fate will have its own challenges, but it will be liberating, gradually ending fanaticism and improving humanity as humanists dream. The Jina Renaissance is directed towards national and international peace and prosperity in a liberal and ever-changing world.

kamal artin, Doctor in medicine. Former host of Dangi Be Dangan in Zurich, former president of KAES and KNCNA, and current practicing psychiatrist in California.

Opinions are those of the writer and do not necessarily represent the views of Ekurd.net or its editors.