As the use of COVID-19 vaccines becomes more prevalent, rare and uncommon side effects are being reported in the medical literature. This is a case report of a 75-year-old male patient who presented on the second day after receiving the Moderna Bivalent mRNA COVID-19 booster vaccine with abrupt-onset behavioral changes and global aphasia without focal deficits. Stroke and infectious meningitis/encephalitis were ruled out. Signs of aseptic inflammation were observed on analysis of cerebrospinal fluid (CSF). The study of autoimmune and paraneoplastic encephalitis was unsuccessful. The observation of a rapid clinical improvement motivated a watchful waiting behavior that concluded with the resolution of the clinical manifestations in less than a week from its onset. This case is reported to support the currently limited knowledge of rare neurological sequelae of mRNA vaccination and is in line with the few recently published cases suggesting vaccine-associated encephalitis.

More rare neurological sequelae have been reported in association with ChAdOx1nCoV-19 vaccines (Oxford-AstraZeneca). However, serious neurological outcomes from COVID-19 mRNA vaccination have been less reported in the literature. [1]. Previously, vaccine-induced encephalitis has already been described in vaccination for influenza, hepatitis B, Haemophilus influenzae type B, measles-mumps-rubella, tetanus, diphtheria, whooping cough, poliomyelitis, and Japanese encephalitis. [2]. Several neurological sequelae have been reported in association with the COVID-19 vaccine, including Guillain-Barré syndrome (GBS), transverse myelitis, acute disseminated encephalomyelitis (ADEM), stroke, cerebral venous sinus thrombosis (CVST), and cranial neuropathies [3]. Multiple mechanisms of vaccine-induced encephalitis have been suggested and are reviewed here. This case shows a possible autoimmune encephalitis to which the COVID-19 mRNA vaccine probably contributed.

A 75-year-old male patient presented with a several hour history of altered mental status, aphasia, and behavioral changes. It was reported that he received a booster dose of the Moderna Bivalent mRNA COVID-19 vaccine one day before the presentation. The next day, he had behavioral swings in which he began trying to eat a disposable plastic plate, paying little attention, urinating in a public place, and a sudden onset of aphasia. His past medical history was notable only for coronary artery disease, hypertension, and diabetes. No previous COVID-19 infection was reported. He had received three doses of the Pfizer-BioNTech COVID-19 vaccine. There was no previous record of his previous vaccination history. In the emergency department (ED) he is afebrile with stable vital signs. Physical examination showed global aphasia and bilateral Babinski’s sign with no neurological focus. Neck stiffness and other signs of meningeal irritation were also negative, including Kerning’s sign and Brudziniski’s sign. Basic laboratory workup, including complete blood count, complete metabolic panel, and drug screen, were also unremarkable. Acute stroke was ruled out by computed tomography (CT) of the head, angio-CT (CT) of the head and neck, and also magnetic resonance imaging (MRI), which showed only periventricular hyperintensities without diffusion restriction suggestive of chronic microvascular disease and mild cerebral atrophy. . No meningeal enhancement was observed (Figure 1). 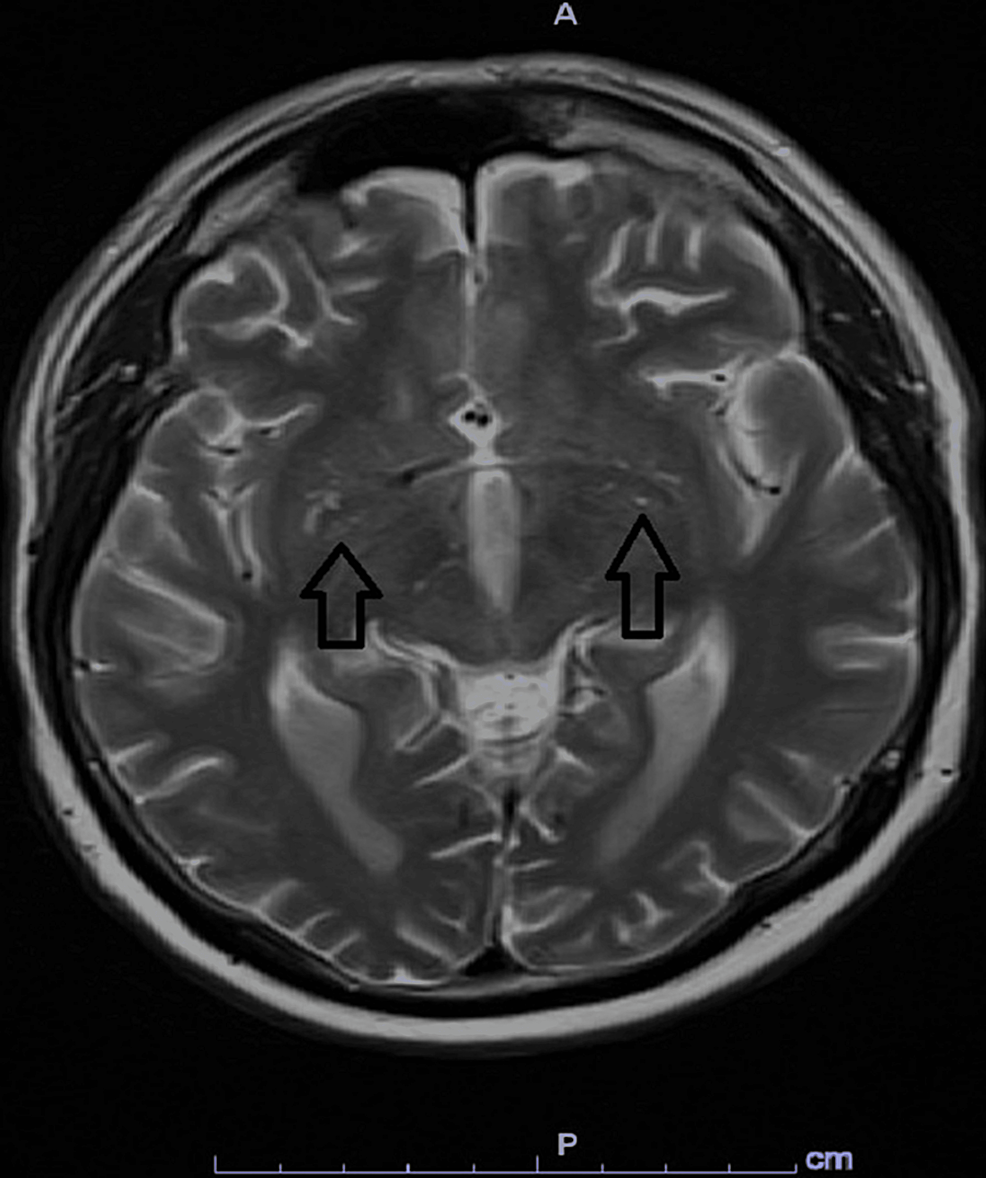 Figure
1: T2 MRI without evidence of lesion or leptomeningeal enhancement.

Figure
2: EEG findings are nonspecific and include a dominant posterior rhythm of mixed theta and delta waves with superimposed faster frontotemporal delta waves but no epileptiform discharges or focal slowing.

The safety profile of these vaccines needs continuous monitoring. Therefore, post-marketing pharmacovigilance remains of paramount importance to establish an accurate safety profile of COVID-19 vaccines. [4]. Our patient meets diagnostic criteria for possible autoimmune encephalitis, including rapid onset of behavioral changes and altered mental status, CSF pleocytosis, and reasonable exclusion of other etiologies. [5]. No evidence of infectious aetiology was seen on the meningitis/encephalitis panel. In addition, the paraneoplastic panel was negative. Although it is difficult to establish a cause-effect relationship between the vaccine and acute encephalitis, the basis for our suggestion is the close temporal relationship between the onset of encephalitis and the administration of the COVID-19 vaccine, sudden onset of symptoms, improvement relatively fast without therapeutic intervention as well as absence of brain lesions in the images.

Only a few cases describing possible COVID-19 vaccine-related encephalitis have been reported in the English literature. [6,7]. Three cases of autoimmune encephalitis related to the Oxford-Astrazeneca vaccine were reported. One presented opsoclonus-myoclonus syndrome and two presented seizures, gait disturbance and cognitive impairment. [8]. Three cases of encephalopathy related to the COVID-19 (Modern) vaccine without MRI findings were also reported [9,10]. Those patients had psychiatric symptoms and were believed to have had cytokine storms. No such finding of cytokine storm was observed in the case mentioned above. In addition, the onset of symptoms in our patient was earlier compared to the other cases. The general belief remains that the benefits of the COVID-19 vaccine outweigh the potential risks.

The neurotropism of the COVID-19 virus has been well documented. Neurological complications of COVID-19 may include anosmia, acute transverse myelitis, acute demyelinating encephalomyelitis, neuromyelitis optica, and acute motor axonal neuropathy. [11]. The mechanism is likely to be direct viral neurotoxicity or neuronal damage from the host’s inflammatory response. It has not yet been established that the COVID-19 vaccine can induce such neuronal toxicity. However, it is possible to hypothesize that molecular mimicry or non-specific immune bystander activation is responsible for these vaccine-related complications. [12,13]. Regarding the association with CNS demyelinating disorders reported in association with the COVID-19 vaccine, the vaccine may act as a trigger for demyelinating disease in those with subclinical disease or genetic disposition. However, a causality has not yet been established. [14]. Furthermore, the mRNA-based vaccine may lead to a spike in protein expression that may contribute to inflammatory complications. [15]. Although not observed in our patient, recent studies also indicate that mRNA vaccination in patients with prior COVID-19 infection may elicit a stronger humoral and cellular response and induce neurological damage. [16].

According to the Vaccine Adverse Event Reporting System (VAERS) and the Medicines and Healthcare Products Regulatory Agency (MHRA), the most commonly reported neurological side effect of the COVID-19 vaccine is ischemic events. [17,18]. A recent systematic review of 30 reported CNS neurological sequelae of the COVID-19 vaccine concluded that the most common is CVST [3]. This was mainly seen in association with the Oxford-AstraZeneca vaccine in 93% and with the Moderna vaccine in 7% of cases. However, this finding may reflect the fact that Oxford-AstraZeneca is the most commonly approved vaccine. The same review reported three cases of vaccine-induced encephalitis/encephalopathy, two with status epilepticus and one with autoimmune encephalitis. Unlike our patient, these reactions were seen after the first dose of the Moderna vaccine.

Autoimmune encephalitis secondary to the COVID-19 vaccine has been less reported in the literature in association with the mRNA vaccine. May or may not be associated with cytokine storms. It can present with psychotic symptoms, seizures, gait disturbances, and/or neurological deficits. The association is based on a temporal relationship and true causality is difficult to establish. Although immunosuppression with steroids or intravenous immunoglobulin has been followed in reported cases of COVID-19 vaccine-associated encephalitis, watchful waiting in our patient with no evidence of cytokine storm concluded with rapid spontaneous recovery.