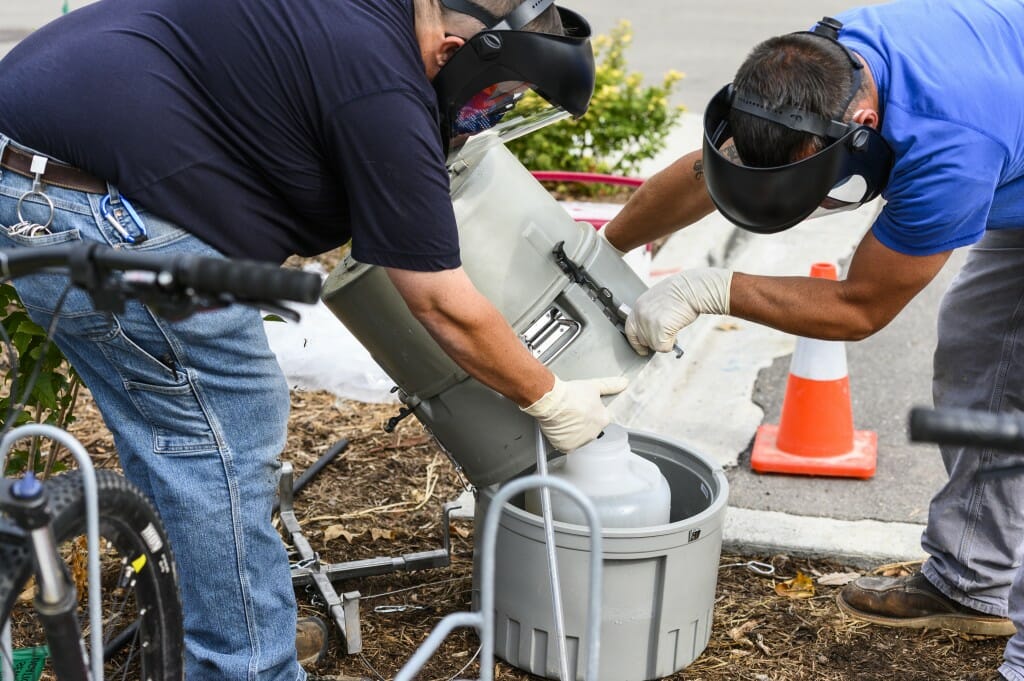 David O’Connor believes that poop can tell you a lot about you and those around you, and science backs him up.

By analyzing data from wastewater samples collected by the Wisconsin State Laboratory of Hygiene Earlier this year, O’Connor and his colleagues detected a highly mutated version of the virus that causes COVID-19 called a cryptic lineage. With some careful scientific research, they were able to trace the lineage back to a single source.

The curious thing about cryptic bloodlines is that, through some unknown process, they develop the same spike genetic mutations found in troubling variants such as omicron, despite not descending from these or related strains. Scientists are interested in studying these lineages, which could be the origin of the next major variant of COVID and a widespread wave of infection.

“How could a person’s virus dumped into sewage have many of the same changes as [omicron variant] more than two years to ‘discover’ how it spread around the world? That’s the big question we’re trying to answer,” says O’Connor, a professor in the Department of Pathology and Laboratory Medicine at the University of Wisconsin-Madison.

This is why he and his team were so keen to trace the lineage they detected back to its source. His findings are the subject of a study published ahead of peer review in November 1 on medRxiv and the focus of a recent paper published in Nature this September.

“It’s like CSI Sewer,” explains O’Connor. “We had a map of where the sewer locations were (where the wastewater samples originated), so we strategically tried to pick which ones would allow us to reduce the source.”

By removing the samples that tested negative for the cryptic lineage and tracing the positive sewers around the map, the team was able to determine the specific office building from which the lineage was being expelled. The team’s goal is to test office workers in the building to see if they can identify the individual transmitting the unique virus.

If they can find this person, they may be able to better understand how infectious the cryptic lineage might be, and whether it can survive outside of the gut environment.

But doing so requires office workers to volunteer for testing. Some of the workers in the building agreed to the nasal swab, but researchers have yet to see the same cryptic lineage in those samples.

That raises some questions: isn’t the person with the cryptic lineage one of the workers who volunteered for a nasal swab? Can the virus be detected in the waste but not in the nasal passages? Or, is the individual already shedding the virus?

The next step in tracking down the individual is to collect fecal samples from office workers.

Finding this cryptic lineage in Wisconsin also made O’Connor wonder how many other people across the country and the world had similar mutations, with unknown levels of infectiousness. He says he can imagine a world where the infrastructure for regular sewage monitoring exists all the time, giving scientists access to community infection rates without relying on individual tests.

After all, COVID fatigue is real. Far fewer people are seeking PCR testing, perhaps to avoid the brain-scraping sensation of nasal swabs, because they are finding tests less readily available in their communities, or, like many people, because they are shifting to a post-pandemic mindset.

Since it is unrealistic to expect everyone in a community to test all the time, passive community testing, such as sewage sampling, provides something of a middle ground. You could also do another passive approach: sucking up what floats in the air.

Across the hall from David O’Connor, another researcher’s lab is studying respiratory viruses that might be found in the air in places like schools and nursing homes. He meets Shelby O’Connor, a professor in the Department of Pathology and Laboratory Medicine at UW–Madison, who is also married to David. 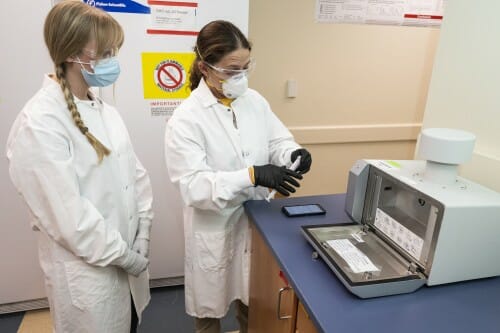 Shelby O’Connor (right) shows research assistant Olivia Harwood how to load a collection sample into a device to test a sample for viruses. Photo: Jeff Miller

Through a partnership with Thermo Fisher that began last year, Shelby’s lab has been collaborating with David’s to monitor for the presence of COVID-19 using AerosolSense Instruments that suck in air and trap things floating in foam cartridges.

So far, they’ve placed devices in public schools, nursing homes and in David’s lecture class at UW-Madison, where they collect air for a day or two, gobbling up viruses and anything else floating around.

Back in the lab, the O’Connors and their team use a solvent to squeeze everything the sponge captured into a tube.

Since air sampling devices collect more than just viruses, researchers then test for viruses of potential concern and work to identify those that are.

They do this through a process called sequencing, in which they look at the building blocks of viral genetic material that may be present in your sample, called nucleotides, and the order in which they come together. That ordered string can be used to identify which virus the team is seeing in a sample.

Sequencing can be used to look specifically for COVID-19, but also to zoom out and identify other respiratory viruses, such as influenza or other unknown viruses, that may be present in the air. Being able to look both narrowly and broadly gives researchers the potential to monitor the air in these places for viruses that could lead to future outbreaks.

“What’s interesting is that we’ve seen different viruses appearing in different populations,” says Shelby. “For example, on the university campus, we saw influenza in late 2021, but in the surrounding K-12 schools where we ran these samples, we did not see influenza.”

Their additional studies could also present an opportunity to track and understand local infection rate data. For example, researchers could create a dashboard for specific buildings and high-traffic areas, such as airports, so that people visiting or passing through can be better informed about their risk of exposure to various viruses. 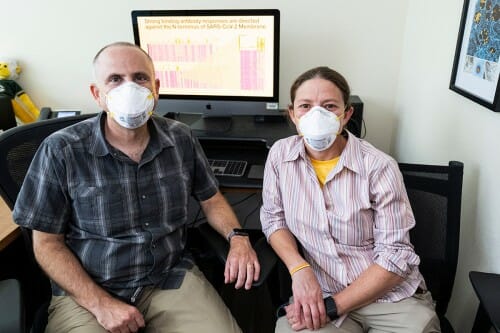 David and Shelby O’Connor look for ways to make their research useful to non-scientists, whether it’s public health workers or people in their everyday lives. Photo: Jeff Miller

A central theme of David and Shelby’s research revolves around conducting science that makes data actionable and impactful to non-scientists. Despite COVID fatigue, the Shelby and David teams have continued to collaborate with other scientists and community partners.

“I think it’s really cool when we work with people who are also just as excited to help each other as we are. It’s been really nice to see how many people are able to focus on the community through this process,” says Shelby.

In the O’Connors’ ideal world, air-sampling devices would be in every airport and sewage system, constantly collecting data and helping the public stay more informed about disease risks.

But as these technologies move further from science fiction and closer to reality every day, the O’Connors stress that it’s important that people continue to use the effective mitigation tools we already have to prevent the spread of respiratory illnesses like COVID-19 and the flu. . Masks, regular handwashing, staying home if you feel sick, and staying up to date on available vaccines are all steps people can take to protect themselves and others.

“You still have to recognize your risk in particular situations,” says Shelby. “Even if scientists are doing their best to predict as best they can, it’s still biology. There are things we can’t control, so you still have to take care of yourself.”