Horizon Therapeutics plc (HZNP – Free Report) reported 2022 Third Quarter Adjusted Earnings of $1.25 per share, which beat the Zacks Consensus Estimate of $1.00. The company reported adjusted earnings of $1.74 per share in the prior year quarter.

Quarterly revenue of $925.4 million decreased 11% year over year, due to lower sales in the Inflammation segment and lower sales growth of Tepezza, which is approved for the treatment of thyroid eye disease (“TED”). . Reveneus beat the Zacks consensus estimate of $889 million.

Horizon shares rose 11.3%, due to better-than-expected earnings results. The stock is down 34.7% year to date compared to the industrydecrease of 21.2%. 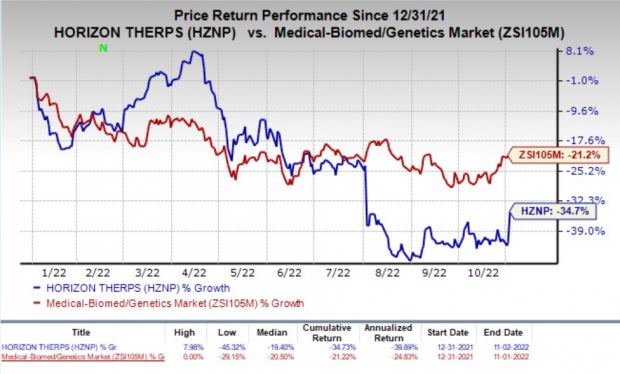 Sales in the orphan segment were $904.7 million, down 5% from the prior year figure, primarily due to lower sales growth at Tepezza. Other drugs like Krystexxa, Uplizna, Ravicti, Actimmune and Procysbi continued the momentum. The segment represented almost 98% of total net sales for the third quarter.

Krystexxa sales increased 21% year over year to $191.6 million. Tepezza generated net sales of $490.9 million in the third quarter, which were down 20% year over year.

Procysbi sales were $57.8 million in the quarter, up 17% from the prior year.

Actimmune sales were $34.4 million in the quarter, up 15% from a year earlier.

Meanwhile, net sales in the Inflammation segment were $20.7 million, down 76% from the prior year.

In September 2022, HZNP completed enrollment in the Phase IV study evaluating Tepezza for the treatment of TED in adult patients with a low/chronic clinical activity score. Top-line data from it is expected in the second quarter of 2023.

At the same time, Horizon Announced that the phase II study evaluating its developmental candidate, dazodalibep, for the treatment of Sjögren’s syndrome, has achieved the primary endpoint in patients with moderate to high systemic disease activity.

Horizon has entered into a collaboration agreement with private biotech, Q32 Bio Inc., to develop the latter’s pipeline candidate, ADX-914, for the treatment of autoimmune diseases. Last month, the company dosed the first patient in a phase II study evaluating ADX-914 to treat moderate to severe atopic dermatitis.

Zacks Rank and Actions to Consider

Akero Therapeutics’ profit beat estimates in three of the last four quarters and missed the other time. AKRO delivered an earnings surprise of 7.66% on average.

Amarin’s earnings beat estimates in two of the last four quarters and missed the other two times. AMRN delivered a negative earnings surprise of 14.29% on average.

Atea Pharmaceuticals’ profit beat estimates in three of the last four quarters and missed them the other time. AVIR delivered a negative earnings surprise of 58.74% on average.