IMLAY CITY — When given a choice between laughing or crying at the curveballs life sometimes throws, Dr. Laura Zelenak’s choice is to joke with gusto.

The busy physician who owns Imlay City Family Practice and a mother of three knows from both experience and education that the old adage is true: laughter is, in fact, the best medicine.

As breast cancer awareness month draws to a close, Zelenak admits that finding humor in a breast cancer diagnosis 10 years ago was a challenge. She says that her strong faith and her family tradition helped her achieve a smile.

“I was raised by a family whose humor is bawdy, sarcastic, and sometimes crude,” says Zelenak. “I married into a family that also appreciates humor… we were going to laugh at ourselves. I was also raised to believe that you can laugh or you can cry… and it’s much better to laugh.

“Even in the worst moments we hug, cry and, above all, laugh,” he continues, “because laughter is the best medicine.”

As for Zelenak’s faith in God, well, that helped too. Shortly before his diagnosis, synchronicity confirmed his belief.

“…God ​​sent me a wonderful friend,” explains Zelenak. “Kathy, a pharmaceutical representative, brought lunch to my office and shared her breast cancer story with me. She said ‘I don’t know why I shared that’, when she finished. It was a week or two before she knew why.”

On September 12, 2012, Zelenak underwent a bilateral mastectomy. Once again, she felt that a higher power was at work, preparing her for what she was about to endure.

“I was in the best shape of my life…my husband and I had just finished a high intensity training program (P90X) that included daily workouts for at least an hour. We got up early in the morning to accommodate them,” says Zelenak. “We did this for a full ninety days… I’ve never been an early riser and I’ve never been able to get out of bed before I absolutely have to. But for some reason I had the motivation to do this. In hindsight, I’m sure this came from God, although I didn’t know it at the time.”

With chemotherapy and radiation on the horizon, Zelenak was faced with the decision of what reconstructive surgery, if any, she would have, weighing the options, the pros and cons, and even the importance (or not) of having breasts.

“I knew that chemotherapy weakens your immune system and makes you more susceptible to infection,” she says. “I didn’t like the idea of ​​putting something foreign on my body. I wasn’t sure what message I was sending to my daughter if she felt the need for breasts. Aren’t they just a physical part of the body? They are not the important parts of a woman. Her mind, her heart, her accomplishments – this is what should be important.”

After pondering these questions and more, Zelenak decided to go with a newer option, which included using her own fat cells in the rebuilding process.

Whether it was her positive attitude, her excellent physical shape, the support of her family and friends, and finding humor through it all, Zelenak quickly healed from the surgery.

He still had a long way to go: 16 weeks of chemotherapy followed by 16 weeks of radiation.

He also had to go back to work at Imlay City Family Practice.

“I was grateful to have two other doctors in my practice to help me carry the load while I was busy with my own doctor visits,” says Zelenak.

In anticipation of hair loss caused by chemotherapy, Zelenak cut her hair short and also participated in a “pre-chemo party” with friends and family. 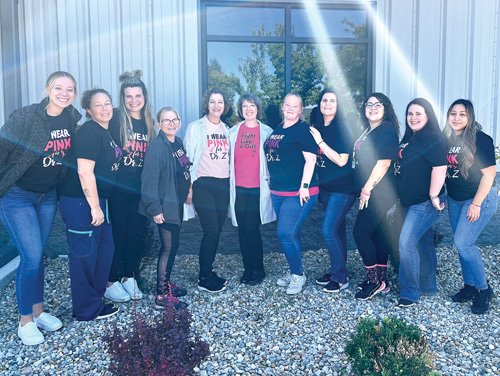 “We talked, drank and enjoyed each other’s company,” she says.

Chemo and radiation visits required long trips to the infusion center, which her husband, Jeff, and her mother took her to alternately.

“My chemotherapy took a few hours to infuse,” says Zelenak. “I was glad to have Jeff or my mom for company.”

Unfortunately, the type of chemotherapy Zelenak endured meant some hair loss. Instead of fighting the inevitable, she decided to accept it.

“I gave my 9-year-old son a hair clipper and asked him to shave my head,” she says. “She was able to participate in me becoming ‘GI Laura fighting breast cancer…you can laugh or you can cry, I chose to laugh.”

She still chose the latter when faced with her hairless image.

“Every time I walked past a mirror with my bald head, I laughed,” he says. “I felt like one of the Coneheads from the Saturday Night Live series that premiered in the ’70s.”

After trying out colorful scarves to cover up his baldness, Zelenak decided he’d rather wear a wig.

“I ended up with two nice wigs, one short blonde, one long brunette,” she says.

Zelenak liked the short blonde and decided that’s how she would wear it to work. With the new look came some small-town speculation, adds Zelenak.

“I heard crazy rumors like ‘Dr. Zelenak is getting divorced, just look at his new look,’” she says.

Still, practicing medicine in a small town brings a host of blessings, for which Zelenak is more than grateful.

“When people go through difficult times, they seem to say things like, ‘I was amazed at all the love and support I received.’ I experienced a great deal of love and support, but this did not surprise me,” she says. “I have family and friends who love and support me. My patients and work family are equally kind and understanding. They all surrounded me to offer what help they could. All of these people have a place in my heart and they showed me that I have a place in theirs.”

Ten years later, Zelenak hasn’t let cancer get in the way of living life. In fact, he has embarked on new adventures.

“I learned to ride a motorcycle, I went skydiving and I had chickens for a while…because of course when you have breast cancer, you get a motorcycle and chickens.”

As for the lessons the ordeal has brought, Zelenak chooses to keep them simple.

“All I did was follow the advice of my trusted doctors and try to live as healthy as I could,” she says. “I don’t feel that being 10 years cancer-free is an achievement. I did what I had to do and tried to keep a positive attitude in the difficult moments.”

Above all, Zelenak is grateful.

“I am grateful for that fight; It gave me an idea of ​​what cancer patients endure,” she says. “I choose not to dwell on the difficulties involved… I will remember great friends like Kathy and laugh at how little time it takes to shower when you have no hair.

“I smile when I think of that time when all of my family members tried on my wigs and we took silly pictures of each other and laughed and laughed,” Zelenak continues. “I will remember how much love and support I felt from absolutely everyone in my life.”

Editor’s Note: Thanks to Dr. Laura Zelenak, DO, who took the time to share her story in hopes it will help others facing the same diagnosis.

Catherine Minolli is editorial director of the Tri-City Times. She started as a freelance writer at The Times in 1994. She enjoys country life, including raising ducks and chickens.