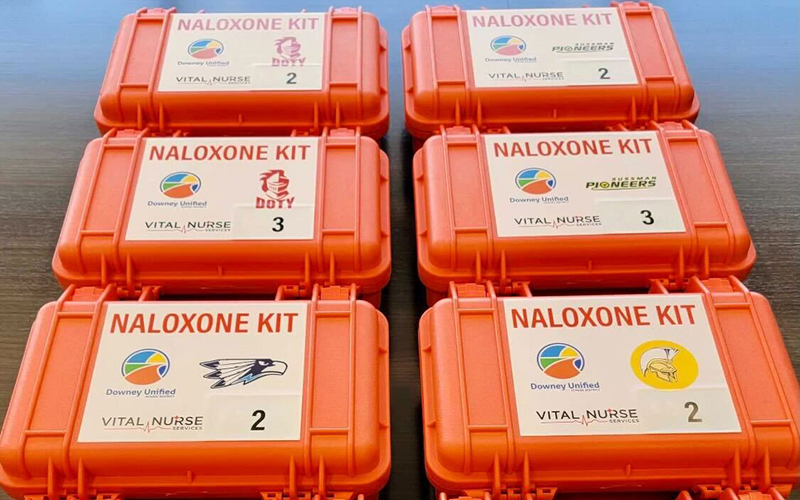 Narcan kits are lined up for use in schools to combat the threat posed by fentanyl. (Photo courtesy of Robert Jagielski)

LOS ANGELES – Melanie Ramos, a vibrant 15-year-old known to her family as a sweetheart, was found unresponsive last month in a girls’ bathroom at Helen Bernstein High School in Hollywood. She later died of an alleged fentanyl overdose.

But two weeks ago, another Bernstein High student was saved when school officials administered Narcan, a nasal spray that reverses the effect of opioid overdoses.

The episodes underscore how school districts across the country, including those in Arizona, are trying to respond quickly to the growing number of victims of fentanyl, a synthetic opioid that the Centers for Disease Control and Prevention lists as 50 times more potent. than the heroine.

The Los Angeles Unified School District, the second largest in the country with more than 500,000 students, announced in September that it will make naloxone, commonly known under the brand name Narcan, available in the district’s more than 1,000 schools, including Bernstein.

“We have an urgent crisis on our hands”, Superintendent Alberto Carvalho said when announcing the measure. “Research shows that the availability of naloxone, along with overdose education, is effective in decreasing overdoses and deaths and will save lives.”

At least nine teenagers in the district have overdosed on pills potentially laced with fentanyl.

in arizona, at least five people die of opioid overdoses every day, a total of 372 opioid-related deaths have been reported so far in 2022, according to the state Department of Health Services.

Arizona has been aggressive in addressing this issue in schools, acting long before LAUSD made its announcement. It is one of six states, along with Washington, Oregon, Rhode Island, Maryland and Tennessee, that requires schools to have a naloxone policy. according to a 2020 report by the Association of Legislative Analysis and Public Policies.

School districts across the country are trying to respond to the crisis.

In Iowa, for example, Des Moines Public Schools has naloxone available at each of its campuses. In the last school year there were 11 medical emergencies in which the nasal spray could have been beneficial, although there were no deaths in the incidents, The Des Moines register reports. 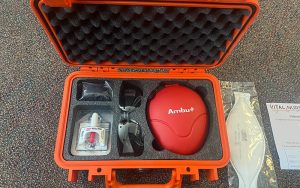 A Narcan kit ready to be used in a school. More schools are requesting kits like these in case they come across a student or someone else who has overdosed on fentanyl. (Photo courtesy of Robert Jagielski)

Baltimore and its suburbs in Howard County, Maryland are seeking to put naloxone in schools after a school nurse in Anne Arundel County used it to save a high school student suffering from an overdose. The Baltimore Sun Reports.

Other districts in Southern California are also dealing with overdoses. The mother of 17-year-old Trinity Cornejo, who attended Troy High School in Fullerton, believes her daughter died of a accidental fentanyl overdosealthough it has not been confirmed by the authorities.

The Downey Unified School District, southeast of Los Angeles, took action to crack down on fentanyl use among its 22,300 students. Every school in the district has various doses of Narcan available and staff trained to administer it.

Robert Jagielski, the district’s senior director of safety, wellness and student engagement, joined the school nurses as the initial group received training over the summer. A subsequent session involved athletic trainers and other authorized school personnel. Now the district is looking to expand this training to teachers, coaches and others.

“We were proactive,” Jagielski said. “This is bad enough, but sometimes minutes make a difference.”

Downey ISD offers resources related to fentanyl prevention, such as student assemblies, PTA meetings and newsletters, and online learning that are accessible to students, teachers, and parents.

“We have to take care of each other, and that’s the kind of message we’re trying to bring to the table,” Jagielski said. “We really try to come together to try to get the message out and try to keep our schools as safe as possible.”

One way the district is doing this is through Armando Gudino, a parent volunteer who has experience as a drug policy manager for the Drug Policy Alliance.

Gudino, whose two children attend Downey schools, wants to connect with parents so they can better understand where their children stand and the changing climates of 2022.

“This war on drugs that we saw declared 50 years ago has failed,” he said. “So we are at a time where it is mandatory that we take other steps to engage people.”

He said he tries to engage families in meaningful and constructive conversations about keeping students safe.

“Sometimes we want to explore and be adventurous, maybe even spark creativity, but these days that interest and willingness to experiment can unfortunately lead to death,” Gudino said.

A lesson that school districts across the country are learning all too well when it comes to fentanyl.